We are very saddened to learn of the passing of Joanne Shenandoah. We had the great privilege of hosting many wonderful concerts with Joanne here in Nuremberg and at the DAI. Our deepest condolences to her family and friends. 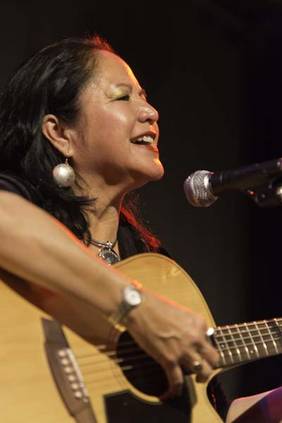 Joanne Shenandoah (1958-2021) was a Native American singer, composer and acoustic guitarist based in the United States. She was a citizen of the Oneida Indian Nation, Wolf clan, based in New York. The Oneida are part of the Haudenosaunee (Iroquois Confederacy).

We are very saddened to learn of the passing of Joanne Shenandoah. For over 30 years we had the great privilege of hosting many wonderful concerts and lectures with Joanne and her husband Doug George-Kanentiio here at the DAI. Our deepest condolences to her family and friends.

Shenandoah battled liver disease in the past few years, but continued to perform, including a production of her own “SkyWoman” symphony with Syracuse’s Symphoria at the annual Convention Days of the National Women’s Rights Historical Park in Seneca Falls in 2018.

She was receiving treatment at the Mayo Clinic in Phoenix, Arizona at the time of her death, according to family members. Survivors include her husband, Doug George-Kanentiio and her daughter, Leah and grandson Ryder.

“Joanne’s beautiful embellishing voice, strong Iroquois traditions, unequivocal elegance and courteous grace made her a prominent role model and highly respected musical Matriarch among Native American communities as well as the mainstream music community at large,” the Native American Music Awards group said in a statement. “She sang with deep roots from her ancestors and flawlessly incorporated her oral traditions into contemporary Folk, Country and Americana formats. She captured the hearts of audiences all over the world and always took time to encourage and inspire younger musicians in her travels. She made an incredible impact on this earth and has paved paths for so many. She will be greatly missed.”