A panel discussion with U.S. Consul General Timothy Liston and other honored guests explored "Transatlantic Relations in Turbulent Times" at the DAI Nürnberg. 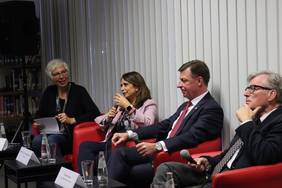 Read the full article on the Fulbright Germany website here.

The wide-ranging discourse addressed the continuing importance of people-to-people encounters for German-American relations, such as those facilitated by Fulbright Germany´s academic exchanges; the Russian war of aggression in Ukraine and its effect on relations between Germany, Europe and the United States;  Germany's growing political importance in Europe and in the transatlantic partnership; the reassessment of European-American security policies and the shift in political, economic, and military spheres of influence. The shared values of the transatlantic community was emphasized together with the common understanding of democracy, and a consensual stance on climate change.